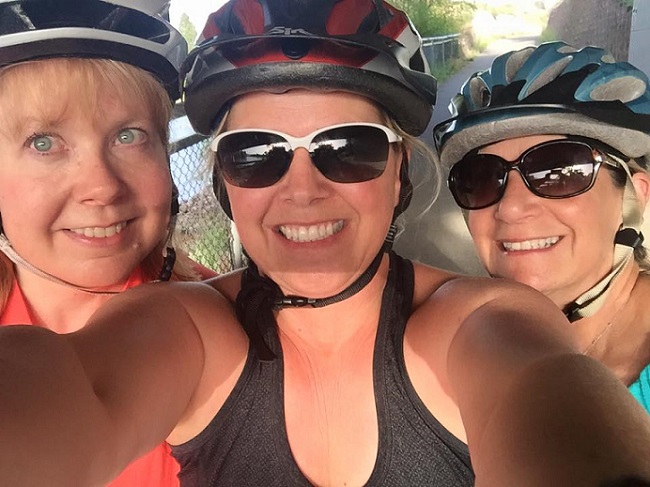 I was not an athletic child, and I really did not participate in sports or things like that. In middle school I remember hiding in the outfield when the class played baseball so I could be involved as little as possible. About ten years ago I started doing things like walking, water aerobics, Zumba, and other classes at the gym. Then in 2012, on a whim really, I decided I wanted to complete a half marathon and I did. I continued with 5k, 10k and half marathons, and over the years I lost over 100 pounds by eating less and moving more.

When I decided to try Farmgirlfit I really wasn’t looking for a new gym. Two friends in my office started going at lunch, and had nothing but good things to say about it, so one day I decided to go with them and watch a class. I joined that day. In retrospect it was one of the best decisions I have made in a long time!

I remember in my Foundations [introductory] class, Savhanna was demonstrating with a 35 pound bar. She handed it to me and I could hardly hold it steady. A year later, I can clean double that! The workouts are hard, but in the end I really feel like I accomplished something, and I’m proud of myself!

The completion of my first half marathon in November 2012. I trained for months and I wasn’t sure I’d really be able to do it until I actually crossed the finish line. Since that time, I’ve done several more and I’m registered for another in November.

I have my first triathlon coming up this weekend (Valley Girl). I’ve participated as part of a team once before, but this will be my first solo event. If you had asked me 2 years ago about doing a triathlon, I would have said, “Never in my wildest dreams!” I’m still pretty nervous about it, but now I know I can do just about anything I set my mind to. I’ve done more biking and swimming in the past three months than I probably have in my entire lifetime. I’m already signed up for a few more tri’s over the next year, and I’m pretty excited about them.

My husband, Mike! He has been not only inspirational, but instrumental for me in terms of my fitness. He bikes, runs and walks with me for hours at my pace, and is patient when I melt down after repeatedly falling off of my bike with my new clips or persist with an inability to be in the right gear when going up hills!

And you want inspiration? This year, some friends and I worked an aid station during Ironman. Seeing what those athletes could accomplish, in triple digit temperatures, that’s inspirational…and maybe a little bit crazy!

Deadlifts, Power Cleans, Wall Balls and almost anything with Kettlebells (exception noted below). :) I’ve also begun to really like jumping rope, although I have only ever done one double-under ever, and thus far have not been able to replicate it.

That I am truly thankful to be doing this. There are times in my life that it really would have been impossible for me to participate in something like this, and I am so very grateful that I am able to do so now!

It’s been said before but I’ll say it again because it is so true. The coaches are the absolute best! Farmgirlfit would not be what it is without them. I have endlessly asked for modifications of various things and they have been so patient and supportive. My second favorite thing is the members. There are all different levels and everyone is focused on working hard but there is a very friendly and supportive atmosphere.

Breakfast on a patio after the Saturday Grind with some equally sweaty friends!

I’m in private practice so I work a lot. In my free time, I like to read, binge watch good shows on Netflix like “Dexter”, watch mindless shows like “The Bachelor” while texting friends about it, and tend my minimalist vegetable garden.

I was once left floating at sea off the coast of Honduras after a night dive. Our boat miscounted the number on board and left to go back to the resort, leaving six of us behind. Luckily we were able to get the attention of a passing boat and were brought back to shore. Yes, I have gone scuba diving after this experience.

Just make the leap and commit to at least one month. Like anything new, it can be a little intimidating and even confusing at first—it took me that long just to figure out what the abbreviations written on the white board meant—but it will be worth it. You won’t regret it!

Visit our Getting Started page to schedule your FREE visit!