To Grain or Not to Grain? 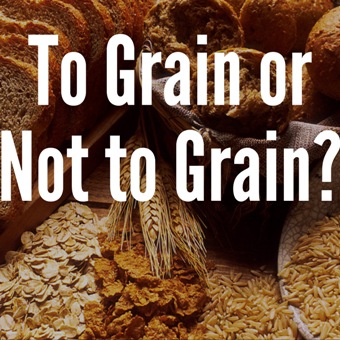 Not so long ago, we were told to “carbo-load” to improve athletic performance.  The best pre-race meal was a plate full of spaghetti.  Then, public opinion shifted completely, almost demonizing breads and other carbs.  General consensus now, though not as drastic, still tends towards a diet with few or no grains.  BUT you will also find plenty of research touting the benefits of eating grains, specifically whole grains, and especially in this month of heart health. So what’s a girl to do?

Let’s start with some facts.

Grains are a carbohydrate.  Your body converts them to glucose to be used as energy or stored as fat.  As food products, not all grains are created equal.  Whole grains refer to those containing all the naturally-occurring components of a grain seed: the bran (outer shell), endosperm (starchy interior), and germ (tiny reproductive kernel).  Refined grains are those that have been processed, usually to remove the bran and germ.  They have been significantly modified from their natural state, and have lost much of their nutritive value.  Enriched or Fortified grains are refined grains with added nutrients -- some that were lost during the initial refining process, others that don’t naturally exist in grains at all.

By and large, experts in the health and fitness industry do not recommend consumption of refined, or even enriched or fortified, grains.  As mentioned, they generally lack nutritive value, unless artificially added, and are processed by your body the same as refined sugars, causing that immediate “sugar high” and insulin spike.

What about whole grains?

Whole grains do have some nutritional benefit, of course varying grain-to-grain.   The Whole Grains Council provides a nice summary.  Besides delivering these specific nutrients, whole grains are also low in saturated fat and cholesterol, and tend to be filling with a low caloric content.  These are among the reasons cited by the American Heart Association, the CDC, and other healthcare professionals as to why whole grains are “heart healthy.”

What’s the argument against grains?

Unfortunately, the majority of foods labeled as “whole grain” do not actually contain whole intact grains.  An article published by Scientific American highlights that the FDA’s definition of “whole grain” only requires that products labeled as such contain each of the 3 components of an intact grain (and in the same ratios).  The 3 components can be, and usually are, separated, and even ground, thereby losing healthful benefits.  Further, most “whole grain” food products also contain added sugar and other preservatives.

Many nutritionists, especially in the Paleo Diet community, claim that even true whole grains should be avoided.  Grains have a relatively low nutrient density as compared to other foods: vegetables, fruits, meat and seafood.  Essentially, the nutrients found in grains can be garnered from other (better) sources.  Besides having poor nutrient density, grains actually contain anti-nutrients that prevent the digestion of vitamins and minerals consumed from other sources.  These anti-nutrients (gluten, phytates, and lectins) are part of the grain’s biological defense mechanism, so they also irritate our digestive system (to varying degrees depending on your sensitivity), physically damage the intestines, and even interfere with our immune system.

So, what’s the answer?  To grain, or not to grain?

Ultimately, you’ll have to decide for yourself.  We’re all different, and it really comes down to how sensitive your system is to those anti-nutrients.  At first you may not think you have any sensitivity, after all you’ve been eating grains your whole life.  The easiest way to know for sure is through an elimination diet.  Eliminate all grains from your diet for a couple of weeks, maybe a month.  Then reintroduce them, paying close attention to your body’s physical reactions.  You may find that your occasional upset stomach, headaches, irritated skin, inflamed joints, or other aches and pains that you thought were just part of life, are actually being caused by the grains you eat.

For those trying to go grain-free, the following are a couple favorite recipes sans grains or sugar: