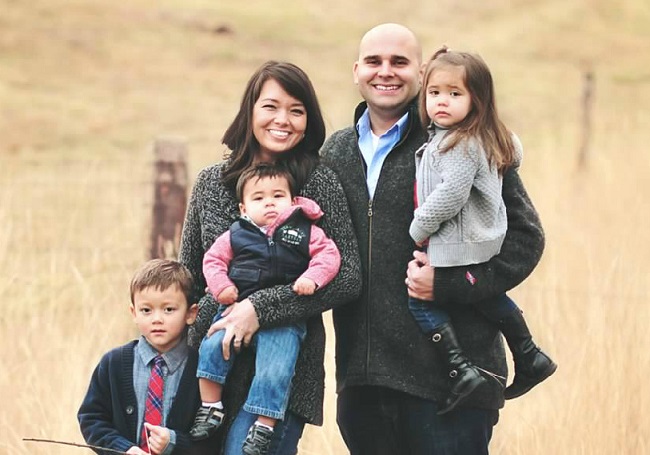 Meet Amy. Amy is mother of 3 “crazy, funny, smart, beautiful, make-me-want-to-pull-my-hair-out children who give meaning to my life.” Davin is 6, Penelope is 3…going on 15, and Emmett, is 2.  She works full-time as an account manager for what she calls “the best advertising agency in Spokane,” and even met her husband on the job -- we’re dying to hear that story!

Life for Amy is busy, and at 36, after 3 kids, she was feeling like, really, she looked pretty darn good. BUT she wondered, could she be healthier, more fit, what else is out there? After hearing about Farmgirlfit from friends and acquaintances, she decided to give us a try!

At the end of October, she tried her first class, and LOVED it. “I’ve tried other workouts before (barre, pilates), but nothing felt like the right one for me until I went to my first Grind.  I felt so energized, pumped and motivated on my drive home!” She promptly joined, and has loved every second…until a couple of weeks ago.

Suddenly, about 5 months into it, she was losing her motivation.  She loved the classes and workouts while doing them, but afterwards, she was feeling, almost defeated.  She couldn’t quite explain it.

I had a conversation with [one of the coaches] the other night where I shared with her that I've been feeling weak and slow, and frustrated that I'm not doing level 2 workouts by now. I was thinking more about that conversation. First of all, thank you for listening! I appreciate very much that you talked with me for more than a few minutes during class.

Second, when I thought more about how I was feeling and what my goals were when I joined FGF, I remembered that it was to get into better shape and feel better about myself.

But what I've actually gotten from FGF in the last 5 months is more than I could've possibly anticipated:

As I’ve thought about it more, I realize that I'm never going to be the strongest, fastest, thinnest, etc. And that's okay.

I'm so much better physically than I've been in a long time. After having three kids, I'm almost excited to get into a swimsuit...almost.

I'm done feeling defeated and discouraged. Cause even while I might need an 8lb dumbbell for something or use a 15lb bar for something else, I still feel like a badass doing all of it. I'm there, giving it my all. And I'm so excited to share that with my daughter who loves coming with me. I love that she gets to see a group of badass ladies working out, lifting weights, because chances are she'll grow up wanting to be physically fit, too.

So I have achieved my goal, and so much more! So I thank FGF, and all of the trainers for being so supportive and encouraging, and the other members for being an inspiration, and everything else that makes FGF so perfectly FGF.

I'll be at level 2 someday. For now I'll work my butt off when I'm in class, whenever I can get to class. But I'm not going to sweat the level stuff anymore... Pun intended.